A downloadable game for Windows, macOS, and Linux

Immune Defense is a strategy game about molecular immunology for big kids and grown ups (ages 10+).  Players use various white blood cells to fight off real pathogens, using real surface proteins and signaling molecules. This is science games like science games should be. This is what scientists dream about, not what you memorize in Bio 101.

I wanted the player to feel confident at all times and to be engaged in the feeling of exploration. The beginning levels accomplish this well, they draw players in, giving players the opportunity use the powerful Neutrophil cells to eat bacteria. You will likely need a walk through for Level 4.  After level 4, the game opens up and you can see the potential awesomeness of the strategy game. The player can zoom in and out, looking in deeper, as if with a microscope, to see the details of the interactions between the white blood cells and the bacteria.

The cells are accurate in size and look like they would under a light microscope in a classroom. However, through the magic of the nanobot c85's technology, in Immune Defense you can also see and use proteins and molecules. Seeing what proteins do in real life lets our players see what biologists imagine in their heads.

This version of Immune Defense came with me from DC to Seattle in 2013.  It was funded by a competitive research grant from the US National Institute for Allergy and Infectious Diseases (NIH/NIAID).

In Seattle, work and grant writing continued. John Biddle contributed vital clean up code. Mike Halbrock, the most patient, talented, versatile game designer and C# wizard ever, was invaluable in creating this version of Immune Defense. Without Mike I could not have responded to the many many many rounds of play testers’ comments and the game would not be as clear and fun to play as it is.  Finally, thank you to all my DC and Seattle play testers and friends. This version of the game was accepted into several competitive indie video game expos, including MAGFest, Gamescape and the Seattle Indie Expo (2015).

I am still working on Immune Defense and on my company, Molecular Jig Games.  But waiting for the perfect, whole game is keeping everyone  from getting to play this pretty awesome demo version.

Please play it, express your support in comments and tweets, tell your teacher friends. All this helps me make more real, nitty gritty science games like Immune Defense!

Linux version is not working... Why it only 7 MB tho..

The file is zipped.  When you unzip it it will still only be 18 MB.  But it should work.  Let me know!  I honestly have not tried it myself in a long time.

After extraction, i only find executable file and no data folder like in Windows version…

I apologize. I will have to take down the linux version.  :(

when will it be updated?

This version of Immune Defense is a prototype for a large, RTS style game. I have 250 levels planned... but I need a team to make the full version.  What would you like to see?

Immune Defense taught me a lot about what makes a game fun and how to help people approach science and keep having fun.

I am working on a mobile mini version.  The plan is, make a mobile, endless phagocytosis game and learn even more about fun while slowly building up my team and our audience.

I will be continuing to blog at MolecularJig.com/blog. I hope you join me on the journey and  thanks for playing!!

id like to see the lung levels. the game so far is rather short and i beat all of the levels within a 30 minute - 1 hour time period

We would love your feedback, everyone. 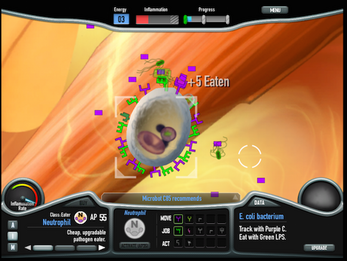